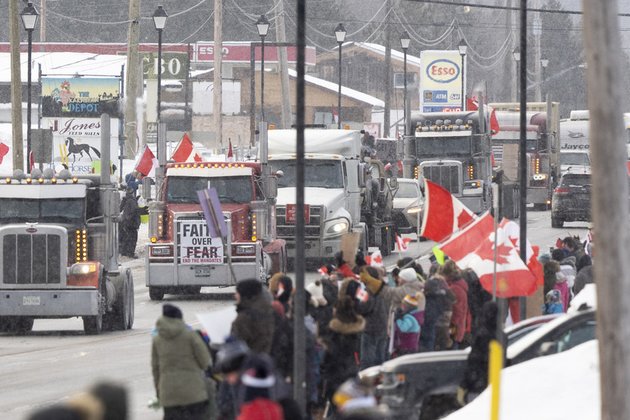 Tesla and SpaceX founder Elon Musk and podcaster Joe Rogan have spoken about the Canadian truckers driving across the country to protest the government’s Covid-19 mandates, after Prime Minister Justin Trudeau denounced them as a “fringe minority” with “unacceptable views.”

The ‘Freedom Convoy’ that set out from British Columbia and is expected to reach the Canadian capital of Ottawa sometime this weekend was ignored by the major media outlets at first. As it approached Ontario, however, the convoy became a political football.

Trudeau denounced the truckers and said they “do not represent the views of Canadians” in a televised speech on Wednesday. On Thursday morning, he announced he had been “exposed” to Covid-19 and would quarantine for five days – thereby missing the convoy’s arrival in Ottawa – even though he has already had the virus and been vaccinated and boosted.

Jagmeet Singh, whose New Democrats are propping up Trudeau’s minority government, also condemned the truckers and accused them of spreading “false information” via “inflammatory, divisive and hateful comments.” He also criticized his brother-in-law for donating to the protest. Canadian media reported that Jodhveer Singh Dhaliwal had asked for his donation back after being told of “the true nature” of the convoy.

Meanwhile, Conservative MP Pierre Poilievre accused the media of cherry-picking individuals to tar the entire protest with the same brush.

“That doesn’t mean we disparage the thousands of hard-working, law-abiding and peaceful truckers, who quite frankly have kept all of you alive for the last two years by filling your grocery shelves with the food that you eat and filling your homes with the products you rely upon,” he said on Thursday.

Benjamin Dichter, one of the organizers of the ‘Freedom Convoy’ and the group’s official spokesman, said they are peaceful and law-abiding. He told the Toronto Sun that the convoy is a protest over Trudeau’s government forcing drivers to wear masks even when alone inside their trucks, a vaccine mandate, and a requirement to get the jab before crossing the US-Canada border.

Dichter also denied reports that GoFundMe has frozen some Can$5 million in donations for the convoy, calling them “fake news.”

Joe Rogan, who hosts the immensely popular podcast on Spotify, also shone a spotlight on the convoy during his show on Wednesday. Speaking to a guest from Montreal, he showed footage of the truckers and described it as Canada being “in revolt” over the government’s mandates.

“It’s a giant convoy of trucks,” Rogan said. “That’s apparently some insane amount of people. Fifty thousand trucks are headed to Ottawa to protest the vaccine mandates by Trudeau.”

Some estimates do have the number of trucks as that high, and Dichter claims the convoy is over 70 kilometers (43 miles) long – almost ten times the size of the 2020 Egyptian truck protest that currently holds the Guinness World Record.