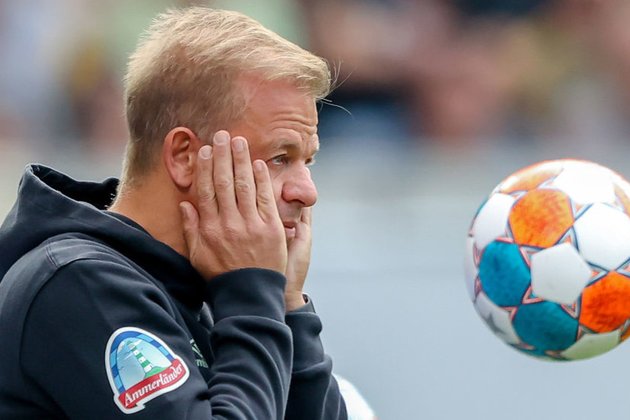 Markus Anfang stepped down in November over the scandal

Ex-Werder Bremen manager Markus Anfang has received a one-year ban from football coaching for his use of a falsified Covid vaccination certificate.

The Sports Court of the German Football Federation, known as the DFB, handed down the ruling, which is counted as starting from November 20 2021.

“Markus Anfang and Florian Junge have significantly violated the role model function as trainers through their actions,” claimed the chairman of the DFB Sports Court, Hans E Lorenz.

“However, with regard to their confessions made, it is justified to suspend part of the ban on probation in order to give them the opportunity to make a new commitment for the 2022/2023 season.”

Anfang stepped down on November 20 as Werder Bremen revealed he had denied using fake evidence to show he received a Covid vaccination.

Thiat came after the manager previously released a statement in which he insisted that he had received both required jabs at an official vaccination center.

“The reason for the decision is the public prosecutors’ investigations into the two coaches and the ensuing unrest surrounding the club,” the second division club announced at the time.

“Because of the extreme stress caused to the club, the team, my family and myself, I have decided to immediately step down from my role as head coach of Werder Bremen,” explained Anfang, who had only led the team for 13 matches before leaving.

“I requested that the club management dissolve my contract, a request they have granted.

“I wish Werder all the success in the world, both for [Saturday’s] game against Schalke and for the future.”

Werder Bremen appointed Ole Werner to succeed Anfang and are currently fighting for a return to the Bundesliga, sitting two points behind FC Saint Pauli, who currently occupy the last automatic qualifying spot of third place, and four behind second-tier leaders Darmstadt.

Football stadiums in Germany have repeatedly been subject to capacity restrictions under local lockdown rules. Bundesliga matches are currently limited to half of venue capacities, allowing for a maximum of 15,000 fans due to attend.

Germany’s most high-profile Covid-related controversy has concerned Bayern Munich and national team star Joshua Kimmich, who had to go into quarantine amid speculation that he would be docked pay because he chose not to be vaccinated.

Club legend Uli Hoeness was among those who were highly critical of Kimmich’s stance. The midfielder said in December 2021 that he regretted not getting vaccinated after he suffered a lung problem as a consequence of contracting Covid.