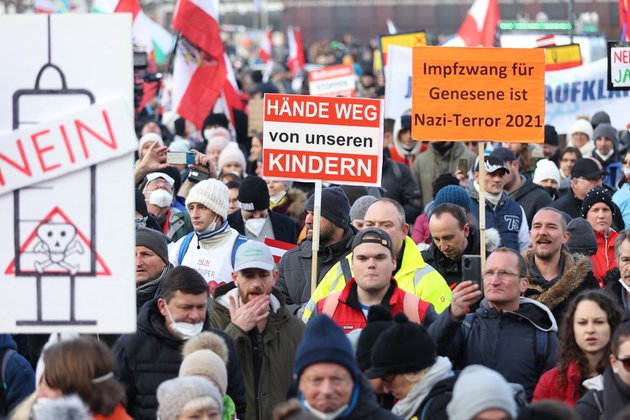 However, a number of restrictions remain in place for people who are not fully vaccinated

People in Austria who are not fully vaccinated against Covid will no longer be kept under the current strict lockdown, Chancellor Karl Nehammer and Health Minister Wolfgang Mückstein have declared. The officials added that the rollback of the current restrictions takes effect next Monday, assuming hospitalization figures remain stable.

However, while the unvaccinated will no longer be confined to their homes, their freedom of movement will remain strictly regulated, with the current “2G” rules remaining in place. The 2G restrictions require individuals seeking to enter hotels, restaurants, bars, and other public areas to present proof of vaccination or recovery from Covid-19 in order to get in, and the 10pm curfew on such establishments will remain in place.

The country resorted to the extra measures in an effort to control infections and enforce its vaccination laws, which included deploying police to inspect immunization papers after the reopening of cultural, entertainment, and hospitality to inoculated persons in mid-December, following three weeks of nationwide lockdown.

Parliament voted last week with an overwhelming majority to impose mandatory vaccinations for adults, despite the opposition FPO voting unanimously against the measure as a “totalitarian low point.”

People entering Austria are required to show proof of full vaccination, a negative PCR test conducted within the past 72 hours, or proof of a booster shot.

As of Monday, the minimum time permitted between receiving a second and third dose of the vaccine will be reduced from 120 days to 90 days, and the validity of the nation’s Green Pass lasts just six months from the conclusion of the holder’s first series of vaccinations. Those with booster doses will enjoy a longer period of validity at nine months.

Austria has imposed four national lockdowns in total over the pandemic. The strict rules have elicited intense pushback from citizens, who have repeatedly taken to the streets in protest of both the restrictions and the vaccine mandate in huge numbers.